Behavioral Addiction or Compulsion: A new study in CCBS devoting to unveil their significance difference in neural cognitive mechanism

Behavioral addiction is used to describe an entire process by which people become dependent on a particular behavior in order to cope with life. This dependence becomes so important to the individual that they will persist in engaging in the behavior although it is harmful.

By contrast, compulsion can be used to address the intense urge to do something, which can sometimes lead to a behavior, but does not always. Compulsions are a small but important part of the addictive process and are also a major part of obsessive-compulsive disorder.

How are addiction and compulsion related? As an addiction develops, it begins to involve the desire or compulsion to exhibit an addictive behavior, such as gambling, but it also involves other processes. Obsessive-compulsive disorder (OCD) is primarily conceived as an anxiety disorder but has features resembling addictive behavior. Patients with OCD may develop dependency upon compulsive behaviors because of the rewarding effects following reduction of obsession-induced anxiety.

To reveal the difference in neural cognitive mechanism between these two psychiatric disorders, Prof. Yuan’s group in CCBS is conducting a pilot neuroimaging project to show their similarities and significant differences during performing various cognitive tasks related to emotion, attention, decision making, language and creativity. Two research work based on this project have been completed and one has just been accepted and published by IEEE Access.

OCD is characterized by obsessions and compulsions, giving rise to the high level of social and occupational impairments. Accumulating evidences indicate that the cause and maintenance of OCD are related to attentional bias. In this study published by IEEE Access, the neural processes underpinning attentional bias were carefully inspected for thirty participants with high/low propensity of OC symptoms (HOC/LOC). Both behavioral and electroencephalogram (EEG) data were collected while participants were performing a dot-probe task with the threat or neutral pictures as stimuli. It was discovered from the event-related potential (ERP) results that compared to the neutral pictures, the threat pictures elicited higher amplitudes of ERP component C1 for both the HOC and LOC groups during the stimuli onset period. However, only the HOC group exhibited lower amplitudes of ERP component P1 to the threat pictures than to the neutral ones, indicating that individuals with a high level of contamination fear might divert their attention away from the threat automatically. The novel findings from the present study can pave an avenue for unveiling the complex neural mechanism associated with attentional avoidance in individuals with contamination fear. 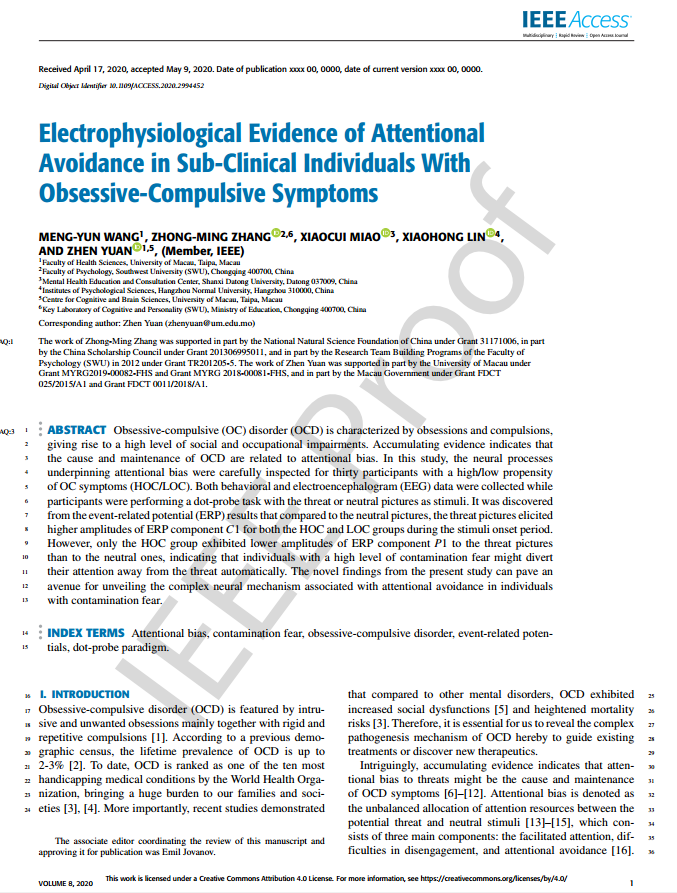