Using Lasers to See How the Brain Decodes the Tangram

Neuroscience accepted a research article entitled “Effective connectivity of the fronto-parietal network during the tangram task in a natural environment” from Prof. Zhen Yuan’s group with the Centre for Cognitive and Brains Sciences at the University of Macau. To the best of our knowledge, they are among the first groups in the world to inspect the neural basis underlying naturalistic visuospatial reasoning such as tangram.

Tangram is an ancient Chinese puzzle that requires putting together seven pieces of flat shapes to form a specific shape. Although tangram has been used to improve mathematical teaching and learning in educational settings for decades, the neural underpinnings underlying tangram puzzles remains unclear.

In this study, the directional functional connectivity (FC) of fronto-parietal networks during the tangram task was carefully examined by combining functional near-infrared spectroscopy (fNIRS) data and conditional Granger causality analysis (GCA). Meanwhile, the causal networks during traditional spatial reasoning tasks were also effectively characterized to distinguish well with those during the tangram one. They discovered that the tangram task in a natural environment was able to elicit enhanced activation in fronto-parietal regions, particularly the frontal cortex. In addition, a strong directional connectivity from the right prefrontal cortex to left angular gyrus was also detected, whereas no effective connectivity was identified between the frontal and parietal cortex during the tangram task. Interestingly, their findings indicated that the tangram task measures a different aspect of the visuospatial reasoning ability which requires more error-and-trial strategy and creative thinking rather than inductive reasoning. In particular, the frontal cortex is mostly involved in the cognitive processing while the interaction between frontal and parietal cortices is disrupted by the hands-on experience during the tangram task. Their neuroimaging results demonstrated that conditional GCA combined with fNIRS neuroimaging technique is a robust tool for constructing the causal networks associated with naturalistic visuospatial reasoning, which paves a new avenue for an improved understanding of the neural underpinnings underlying tangram. 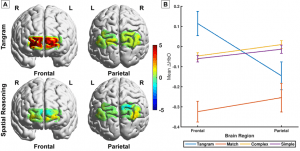 T-maps on the brain templates (A) and line chart of the averaged concentration (b). The brighter color in the T-maps denotes higher t values resulted from the t-tests.